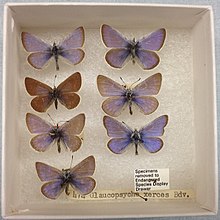 The Xerces blue (Glaucopsyche xerces) is an extinct species of butterfly in the gossamer-winged butterfly family, Lycaenidae. The species lived in coastal sand dunes of the Sunset District of San Francisco.

The Xerces blue is believed to be the first American butterfly species to become extinct as a result of loss of habitat caused by urban development. The last Xerces blue was seen in 1941 or 1943 on land that is part of Golden Gate National Recreation Area. LINK TO EXTINCTION DIARIES SHORT VIDEO ON BLUE XERCES 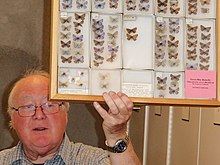 Specimens in California Academy of Sciences.

The species was first described and documented in 1852. It was characterized by blue wings with white spots. The butterfly's food plants belonged to the genera Lotus and Lupinus. Xerces probably associated with ants in its larval stages as part of a symbiotic relationship. One of the theories regarding the extinction of the species is that with human settlement in the Bay Area, new species of ant were introduced which slowly replaced the existing ant species within the butterfly's super habitat. Efforts are on to reestablish related butterflies in the Xerces blue's former habitat. The Palos Verdes blue (Glaucopsyche lygdamus palosverdesensis) 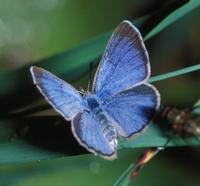 which is considered a Los Angeles cousin of the Xerces, is being reared in labs. A new Xerces-like subspecies of the silvery blue (Glaucopsyche lygdamus) has been discovered as well.

In popular culture...
The Xerces blue butterfly was shown and referenced in The 4400 episode "Ghost in the Machine" when it was brought back from extinction. This was due to a superhuman ability given by the fictional drug "Promicin". In The 4400, Xerces blues where thriving at the beginning of the utopian community Promise City. The Sacramento band Deftones released a song called "Xerces" on their 2006 album Saturday Night Wrist. Also there is a Xerces blue in a Silent Hill's memento called Pinned Beauty.
I HOPE YOU ENJOYED this info & pics!
Blessings, cc