I LOVE postcards. I started out collecting postcards from anywhere I went or if I knew someone traveling I would ask them to send me one or bring one back :) I love travel and can't always afford to go where i want to go, so postcards allow me to see other parts of the world and get some insight from people who live or have gone there.

I am in my 30's and and am a Registered Nurse. I work in Critical Care at a Level I Trauma Center and I love it. Nursing is not just a job to be but it is a calling and my passion.

I am also a fitness enthusiast and enjoy working out. In 2012 I completed the Tough Mudder - which is a 10+ mile obstacle course. I've also done 5K's and other obstacle courses. I've started yoga and barre this year and enjoy it. I want to master a handstand!

I really enjoy the beach/ocean and I wish New England summers were much longer! I love the hot weather and long days. I enjoy skiing, ice skating and hiking in the winter. I used to enjoy scrap booking but don't have much time recently for it.

I started swapping postcards so that I could expand my collection of cards from around the world. I mostly like cards that show me something about another part of the world. But I do like other, random cards as well! If I get something that doesn't interest me, I just add it to my stash to swap later! I don't mind written on - I do prefer unwritten a little more, either way is a lovely surprise!
I like to learn about other cultures so if you want to tell me about a favorite tradition, something specific about your area of living, lifestyle, education, work life (any nurses?), favorite foods/dishes from where you live....things like that :)

Music has always been a big part of my life and important to me. I feel it helps me relate or cope with things in life and sometimes it helps make life just a little bit sweeter!

You name it and I will listen to it....I like pretty much everything for music - pop, rock, country, metal, very little classical, reggae, hip hop, blues, R&B, Rap. Most of the time I am listening to Alternative.

I swore that by the time I turned 30 I would be in the best shape I had ever been in. In January of 2011 I embarked on attaining that goal and I greatly surpassed what I thought possible. I lost 22 pounds and I completed a 3 mile obstacle course before my 30th birthday and then a 10-12 mile Tough Mudder course shortly after. I remain focused on fitness and eating healthier than I ever have. Like most people, I have encountered a few speed bumps along the way, but that is okay and it happens to everyone along the way! It truly is a lifestyle change to be fit and healthy - dieting does not work for long-term goal minded people.
I've watched a couple of documentaries regarding food and nutrition recently and they were definitely eye-openers. I have been dabbling in the vegan diet for a little while and I am trying to develop better choices on buying fresh and organic when I can and eating less animal proteins (and more sensible portion sizes!). I love trying new vegan/vegetarian recipes and follow a couple of blogs. I am always looking for other fitness enthusiasts to inspire me and am happy to help other people become or remain inspired! I get bored easily so new recipes or fitness routines are welcomed!

I like to send/receive other things in addition to Postcards:

~ Map cards from Georgia, Michigan, New York, South Carolina, and Washington. I am missing these from my 50 state collection.

~ I haven't made any ATC's but would love a couple.

From all of us at "WIYM" group! 
Please rate me for the Super Easy Notecard Swap #13. Thanks.


Happy Birthday from a fellow Gemini!


Welcome to The Postcard Place! 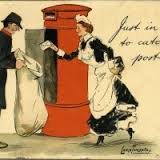 Would you please go to the group forum and read the requirements thread, then comment that you have read and understand. :)

Thanks and have fun!


Thank you very much for the two beautiful cards you send me for the 3P's PC tag, I love them and am very happy to add them to my collection :)


Hi! I see that you're into postcards and would love it if you could join my University Postcards swap! It closes really soon. Have a great day!


HI, I live in Nevada and was wondering of you wanted to do a private postcard swap with me! Thank you


Thank you for joining my swap, (cooking our way through the alphabet!) I hope you enjoy it and collect lots of lovely new recipes