I listen to a variety of things. I would have to say my top three are Alternative, Orchestral (not really classical), and Rock. I mainly listen to just about everything but country and rap though.

I'm always looking to add new music to my iPod, so suggestions are very welcome.

Oh geez. I don't really remember much of what I've read. I do enjoy Manga for lite reading, but as for a normal novel I usually read Young Adult books. I have read all of the Harry Potter series, I remember reading the last few books of it nonstop. I do enjoy H.P. Lovecraft as well. I have this huge hardcover book with all of his stories in it. 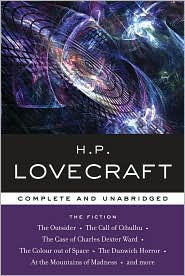 I was browsing this store downtown that I had never been in before and I saw a book called Cthulhu's Reign. It's a newer book (Came out in April) and has a bunch of stories based on Cthulhu and the Old Ones by multiple authors so I had to pick it up.

My all time favorite movie is most likely Sleepy Hollow since it was the first "scary" movie I ever saw. I do enjoy Tim Burton movies, as well as Pirates of the Caribbean, Watchmen, V for Vendetta, Valkyrie, Disney, Miyazaki movies, The Dark Knight, Star Trek, and whatever else I am forgetting.

I try not to watch too much TV, but when I do I enjoy Ghost Hunters, Pawn Stars, Animal Cops, and when I'm up really late Jerry Springer and The Steve Wilkos Show.

I am 19 years old and am attending a community college in my area. Recently I have been debating on what I should major in, but have finally decided to follow my passion and have an equine major. No community college around me has anything like that, so I'll definitely have to go out of state. Right now the college I am really looking into is in Iowa. For right now though my class are Calculus I, Sculpture I, and Total Fitness. My Softball class ended up being canceled, but with the fitness class I'll still be able to get in better shape.

I currently own four animals. Three cats whose names are Jack (female), Ozzy (female) and Charmin (male), and a male Chihuahua named Tiny. The cats my dad found in a field he was mowing four years ago. They were so small that we had to bottle feed them.

My instrument of choice is the viola. I've been playing since I was about 10. It is currently being sent away though to be checked out to see if anything needs to be replaced. (Update: Got it back the other day. It has new strings and everything!) It was made in 1974 in Germany.

I also ride horses...well, I haven't in a year but am currently trying to find a new barn to start riding at again. I took up horse back riding when I was around 11.

I used to draw and write a lot, but stopped for some reason. I'm slowly trying to pick those back up though.

Video games are another passion of mine. I don't play them near as much as I used to, but I do keep up with game releases and other gaming information. I actually know more about the video game world than my obsessed cousin and brother.

I love books. I don't read as much anymore, but I still like to collect them. I'm apart of a site called Paperbackswap.com where you list books, send them to the person who orders them, receive a credit and then pick whatever book you would like to receive.

I also recently joined a site called Postcrossing.com where you send and receive postcards from around the world. It sounded really interesting to me.

Also, I am not going to list any likes or dislikes or anything like that. I love surprises, so I would rather be completely clueless as to the contents of what I am receiving. I have seen a lot of people put stuff about religious items in their profiles. I am not heavily religious, but I consider myself to be a simple Christian. I am very interested in other religions though and especially the occult. Basically what I'm saying is that I don't mind receiving religious type items.


Hi hon, I really hope that you are okay.

Was heading over here to ask about the N&FT WTA #3 prize you owe me, but see that you have gone awol.

Hope everything is okay...


haven't received the madala swap from you....


Hello! I just wanted you to know that I sent out my Mandala today! You should receive it in a few days!


Well your ATC ABILITIES ROCK! Have confidence. Your ATC really made my day great!! Thank so much for the envelope directions!!!

Thank you for leaving the comment on my page Oh no not the GBA System it's self i meant just games =) They do not sell him no more =/ And ebay is normally for over seas, Thats very nice of you, Maybe we could do a private swap soon ? Oh nice i have all the pokemon games and waiting for pokemon black and white to come out next year XD Would you be interested in a private swap ?


Hi, I am your partner for the "Read my Profile and leave a nice comment #3" Swap. It was very interesting to read your profile, als because we seem to share several interests. Like you, I also love to read and am a huge cat fan. :) Some time ago I also gave postcrossing a try and really enjoyed swapping postcards there. I got so many interesting and beautiful cards from all over the world. I am sure you will enjoy that site as well! Have you already receveided/ sent out some cards?


I'm interested in reading Lovecraft, but have never come across one of his books. I'm gonna have to do that. One of the series I've been into lately has been The Edge Chronicles. The series is amazing and the fact that the whole story takes place in the world with alternate physics just makes it all the more interesting. You should check it out.

My son played the violin, then the cello, then switched to the viola. I can't get him to play anymore, but for him to take an interest in anything other than video games and movies is a feat in and of itself. lol. I wish he'd play more.

That's very sweet what you did for those kittens. I'm always glad to see people helping animals out and ending up with great companions.

Have an awesome day!


Thank you, Hannah for hosting the "(Hopefully) Interesting Email" swap ... it was great fun. :)


Hi Hannah! I'm here for the Read my profile and leave a nice comment #3 swap! First, I wanted to say something about another swap - Thanks so much for starting the Interesting e-mail swap. I had a lot of fun doing it!

I'm also a huge reader with not as much time as I would like to dive into books. Still, I'm trying to read 100 books in a year. We'll see how that goes. :D

I hope you have a great day!