I'm Steph(anie); pronouns: she/her. I'm a nerdly dorkish 41 year old, married to a nerdly dorkish 40-something year old and mother to one nerdly dorkish 22 year old. We all live in Tallahassee, Florida. I'm a homemaker and try to cram as much creative playtime into my day as possible between one boring chore or another.

I am very enthusiastically a homebody, thanks to some major introversion, social anxiety and other personality issues. Making art (and swapping) is my way of coping with the internal junk and connecting with people. Crafting is the great neutralizer; I'll talk shop with literally anyone, damn the shyness and social anxiety.

I’m obsessed with making things. I’ve been at it for awhile now - crafting for at least 20 years (going back to when I scrapbooked my daughter’s babyhood) and I've tried oodles of things. For the past 12 years I’ve been focused on paper/mixed media art and swapping. Right now I’m all about mail art, gluebooks, ATCs, artbooks/zines, and just generally gluing paper to paper. I got myself a Gel Press for my 40th birthday in 2019 and am over the moon about it.

Beyond art and cleaning up messes, meme, movie and TV references rule my world. I enjoy “airplane naps” on the couch, watching entirely too much TV, road trips, thrifting, exploring historical sites, long walks on the beach, candlelit dinners….oh, wait.

January 2021
I'm still taking an indefinite break from organized swapping here (both as a host & participant) to focus on more informal exchanging via tags/RAKs and exchanging on other sites. Swap-bot can be a pressure cooker for my anxieties, so for my own well being I'm taking a break from the official business of having to micro-manage things.

That being said, you can always reach me here (or at any of my social media links above + sendsomething.net - I'm # 3806) if you'd like to exchange some random mail art. If you already have my address, send me something; I'll reply in kind.

I host a collage ATC swap (Cut+Paste ATC Swap) on Instagram. It's a bimonthly, international swap. More info is on my profile there if you're interested. 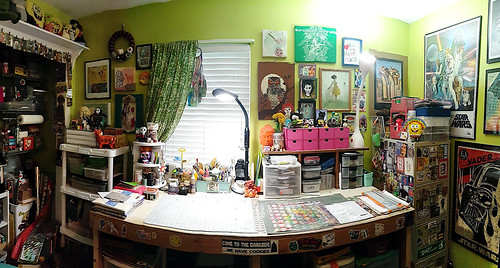 This is the "artsy" side of my craft cave, where I make all the things. You can usually find me here, avoiding housework.

a modest outpouring (lol) of SOME top faves... 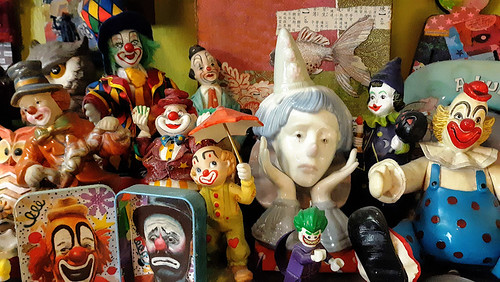 Some of my clowns.

If you're a more visual person, most of these and more are represented on my Pinterest boards: Characters • Art • "Aesthetic" • Misc. • Colors

About stickers: I'm not TOO picky when it comes to stickers. I'm not a fan of puffy or epoxy stickers, freebie Highlights types of stickers or Disney, Barbie, Winnie the Pooh, super kiddie themes. BUT I do flagrantly love the Fashion Angels line of sticker books (the ones that are emojis, cute animals, outerspace, fun sayings, etc. - I have Series 1, Series 3, plus another random collection I got at Five Below) and in general anything stylized, kawaii, doodles, foods with faces, animals showing their butts, animals dressed up....just ridiculous and fun/funny stuff, which I guess is construed as kiddie by most. I like more "mature" themed stickers too: florals, succulents, geometric, artsy, faux postage, skulls, occult/supernatural stuff, Violette Stickers...I have The Antiquarian Sticker Book. I mean, if it's stickers, I'm there. Small flakes, vinyl, collections, good dollar store variety. It's a weakness.

Kind of obscure supply bit I love: the holey edges of spiral bound book pages - intact, not ripped. If you unbind a spiral bound book (calendar, journal, w/e) the paper edge with all the holes - I nerd out for that. 😄

I Do Not Care

I'm not bothered by folded or ripped papers, partially used or cut sticker sheets, small scraps of paper, typed notes, metered postage or plain envelopes (unless it's specifically a mail art swap). If you're sending me a postcard, I don't mind stickers, doodles or random quotes instead of a message (it's better than forced small talk about the weather). I know we can't be "on" all the time. Do what's best for you. ✌️

Also, I don't expect extras to be sent with swaps. If I join an ATC swap, that's all I'm expecting: an ATC. I send extras occasionally but only when people are open to receiving them AND I have something they will like. Please don't send me random extra crap just to get it off your desk.

I have dislikes. Sue me.

Strict NO GOs for me:

Simply NOT A FAN:

As it pertains to swapping and crafting, I rather not receive these things or themes...


Oh, Stephie! Thank you so much for the fabulous Dia de Los Muertos woman postcard! I love it! Your art is always exquisite. ❤️💀🌹


Thank you for the OMAE RAK of loads of stickers!!! I was so excited to receive them! I've been all about stickers lately (well I always am). I even went out and bought more this afternoon. LOL! Thank you for thinking of me. =D


Hi, the BTC you sent via OMAE just got here yesterday. Thank you! I guess those didn’t quite catch on, did they? That’s Ok, I’ll enjoy this one! Have a beautiful day!


Thanks so much for the awesome birthday card - love it!!


Thank you so much for the “Cheap Postage - Pay It Forward” tag! I am in absolute love with the owl and bird postcards, and everything else was simply awesome as well. BTW, the ATCs on your profile here are fabulous (love!)!


Thank you for the lovely Affirmative art tag.I appreciate your generosity and. Art!


Thank you for the great sticker bomb pc RAK! What a fun surprise in my mailbox! Merry Christmas.


Hey Steph! The Postcard + traveled at a goodly speed... Many thanks for the hilarious postsecret, the mini collage and cool doodles. It's going up on the Christams string.. Have a good 'un!


I love the Frida Kahlo ATC! Those colors! What a beauty! I’m putting her on my inspiration wall!


Thank you so much for the awesome Birthday Party PC!! Love it! Hope your B-day was awesome. :)